This week we feature two stories relating to bodies of water; Girl Gone Wild correspondent Jamie Pratt and Chris Chang-Yen Phillips take a journey in search of Lake Sturgeon and Jennifer Wickham shares her poem, “Engussi Wedzin Kwah” about the sacred waters in her traditional territories. Also, Rebecca Rooney speaks to urban ecologist Jason Aloisio about Green Roofs in a piece from our archives.

For our new Terra Informa segment on environmental poetry, Annie Banks spoke with Jennifer Wickham this month. Jennifer shared her poem “Engussi Wedzin Kwah”, about sacred waters on her traditional Wet’suwet’en territories, and also some of her thoughts on poetry, the role of a poet and what’s currently inspiring her writing and resistance. **Correction!** Jennifer’s book of poetry will be coming out in summer 2013. 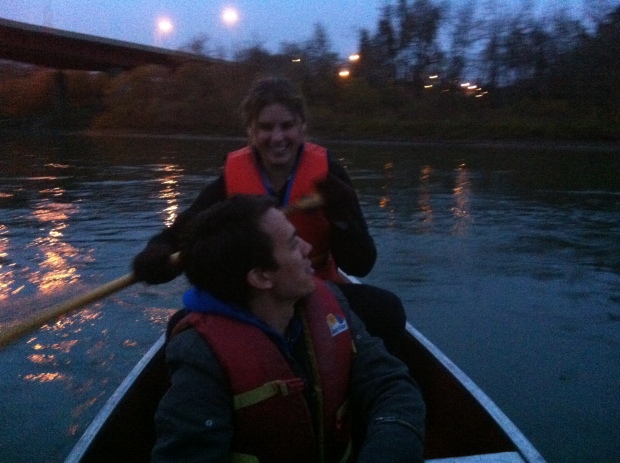 Well every now and again Terra Informa correspondent Chris Chang-Yen Phillips takes a trip with our resident wildlife expert, Jamie Pratt. She’s the creator of the Girl Gone Wild wildlife documentary series, and this time we decided it was time to journey down Edmonton’s North Saskatchewan River in search of an ancient fish — the Lake Sturgeon.

Jason Aloisio is an urban ecologist, working at New York City’s Fordham University. He was recognized in 2011 for his work by the Ecological Society of America at their annual conference in Austin, Texas. From our archives, Terra Informa correspondent Rebecca Rooney ventures to Austin to catch up with him to ask about his research into green roofs.
Links:
Jason Aloisio’s green roofs presentation
Article in Nature News on Jason’s research
Jason’s blog

This week on the show, a look at the fight against shark finning in Edmonton and on the high seas. We talk to a member of Fin Free Edmonton to ask why the group is trying to get a ban on shark fin sales in the city. Then we take you out to Florida, to talk to a special agent who helps catch shark fin poachers in the act. Lastly, we shift gears to ask naturalist John Acorn why field guidebooks are so popular, and what they’re really all about.

Agents like this at the National Oceanic and Atmospheric Administration help enforce the US ban on finning sharks. Photo credit: NOAA [Public domain], via Wikimedia Commons

Shark Fin Soup has become a culinary faux pas in recent decades. Animal welfare advocates have argued fiercely that it is inhumane to remove a shark’s fin and then allow the animal to die by discarding the rest of the body back into the ocean. University of Alberta Law professor Cameron Jefferies is a member of Fin Free Edmonton, an organization fighting for a municipal ban on shark fin products, which are still used in soups in some Chinese restaurants. CJSR’s Natalia Knowlton spoke with Jefferies in Edmonton for the CJSR Edition.

More on this story: Metro, Fin Free Edmonton on Facebook

Have you ever wondered how shark finners get caught? The US strengthened its laws against shark finning in 2011, banning the practice for almost every shark species in American waters. Paul Raymond is a special agent with NOAA, the National Oceanic and Atmospheric Association. He’s helped enforce the US laws protecting sharks. Chris Chang-Yen Phillips reached him in Florida to ask how they do it.

More on this story: Wired, Oceana

From our archives, we’re catching up with one of Canada’s most avid naturalists. John Acorn is an entomologist, television personality and author of 17 books. His best known role is probably as the host of “Acorn: Nature Nut” the popular tv show on all things creeping and crawling. But when he’s not writing television shows, teaching students or working on his research, John Acorn is often at his desk writing field naturalist guide books. If you think there’s not much controversy in how to draw or write about a few butterflies or beetles, think again. Terra Informa correspondent David Kaczan spoke with John Acorn.

More on this story: John Acorn’s guide to Ladybugs of Alberta

The recent eruption of Eyjafjallajokull (pronounced Eh-ya-fyah-la-yo-kut), the Icelandic volcano grounded thousands of planes across Europe last week.  The flight ban lasted for five days, and there continue to be some “no fly zones.”  Rebekah Rooney asks the question, what are the environmental impacts of the eruption and how do those impacts compare to the effects of grounding of so many planes?

Here are some links to differnt facts and studies quoted by Rebekah.

Many cities across north america are turning back restrictive bylaws and allowing urban chicken keeping as a way of addressing food security issues and building community resilience. However these efforts are usually confronted by a small and very vocal opposition, wielding urban myths dressed up as arguments. Terra Informa corespondent Myles Curry interviews Laura Klassen Russel of Edmonton’s River City Chicken collective about this practice of urban agriculture and debunks some common arguments against urban chicken keeping.

Every year the world hauls over 90 million tonnes of fish from the oceans. It’s a crucial source of food, but there is some concern that unless we start to manage fisheries more sustainably, that food source could be lost. Good fisheries management is possible, and to understand how and where this has been achieved Terra Informa corespondant David Kaczan speaks to economist and fisheries expert, Professor James Murphy.