At this point, hybrid vehicles have been on the market for a while. The Toyota Prius began selling in Canada fifteen years ago. But despite the constantly improving technology, electric and hybrid electric vehicles account for less than 5% of the automotive market. Adoption is proving to be slow.

To examine what’s happening at the point of sale, Terra Informa’s Carson Fong sat down with a few members of the Lexus of Edmonton team. Wayne Chak, a sales consultant at the dealership, and Matt Miller, the general manager, spoke about the trends they’re seeing with their clients.

Let it not be said that mosses are less fascinating that other, more impressively plumed species of flora. For some nature nerds, they are still plenty interesting. Tasmia Nishat caught up with Edmonton’s own “Moss Man,” Dr. René Belland of the University of Alberta’s renewable resources department. They discussed his passion for this plant and the legal troubles of protecting rare mosses.

This week, we talk about two “great” things in the Canadian ecosystem, the Great Lakes and the Great Bear.
And, we have the inside look at a documentary called The Carbon Rush, that tries to connect viewers emotionally with the impact of carbon credit programs in the global south. 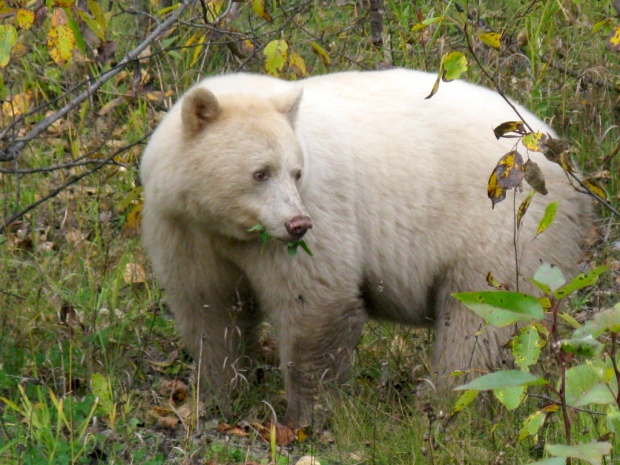 The Spirit Bear has become symbolic of the Great Bear Reserve of Northern BC. Photo Credit: Valard LP

Canadians for the Great Bear

The use of charismatic megafauna is an important tactic used to raise attention to important issues. The proposed Northern Gateway Pipeline threatens many species in the Northern Western BC area, but the WWF had seemed to choose the Great Bear as an ambassador to the ecosystem they are trying to protect. Kyle Muzyka talks with the WWF vice president of conservation and pacific, Darcy Dobell, about the use of the Great Bear as an ambassador, and how the pipeline is merely an obstacle in the scheme of things.

More information on Canadians for the Great Bear:

Next up, Chris Chang-Yen Phillips brings us a Green Screen review of The Carbon Rush. It’s a documentary that tries to do something brave – making viewers connect emotionally with the hidden underbelly of carbon markets. But does it live up to its own hype?

State of the Great Lakes

The Canadian and US governments recently renewed their commitments to cleaning up Canada’s fresh water bodies by amending the Great Lakes Water Quality Agreement. This new plan expands the scope of concern to include issues like impact of climate change, and the protection of lake species and habitats. To get a better sense of the problems currently facing the Great Lakes, we contacted Lake Ontario Waterkeeper, a charity that’s working to help make the lakes safer, cleaner, and healthier for the public. Last fall, Hamdi Issawi spoke to Lake Ontario Waterkeeper’s Vice President, Krystyn Tully, on the state of the Great Lakes.

On this week’s episode, Terra Informa speaks to Toghestiy, hereditary chief of the Likhts’amisyu Clan of the Wet’suwet’en First Nation, about Wet’suwet’en resistance to pipelines in their territories. In the second part of the program we investigate the challenges and downfalls of using peat moss in backyard gardens. Finally, from the archives, Terra Informa speaks with Amy Goodman of Democracy Now! about the importance of independent media.

An unusual phenomenon is taking place in the province of Newfoundland and Labrador. Biologist Bill Montevecchi says that gannets who normally nest at Cape St. Mary’s have left their nests and chicks for food further north. Montevecchi says he has never seen anything similar in his life. Cape St. Mary’s is empty of gannets, but there have been plenty of sightings up in Labrador. Water temperatures are apparently 3 or 4 degrees warmer than usual. It is not clear whether the gannets have permanently abandoned the nests or not, but their absence makes the nests and chicks vulnerable to the elements and starvation.
More on this story: Canadaka.net, The Tyee

TransCanada had hoped to quietly begin construction of the southern Keystone XL pipeline. According to their spokeswoman who talked to the LA times, construction began on August 9th. The Tar Sands Blockade, a self-described coalition of Texas and Oklahoma landowners and organizers unfurled banners at two equipment staging grounds in Texas and Oklahoma. The group plans to use nonviolent direct action to physically stop the Keystone XL tar sands pipeline. TransCanada has agreed to reroute the northern section of the pipeline as the current plan has it would go through sensitive aquifers and requires international permits due to its proximity to the Canadian border. If US officials approve the northern stretch, construction could begin as early as 2013. The pipeline project faces enormous controversy in the United States and Canada.
More on this story: LA Times, Ecowatch, Yale Environment 360

3000 Federal Environmental Assessments Cancelled
Businesses hoping to build or expand marinas, coal plants, and gravel pits without environmental reviews will find their job a little easier this fall.Those are some of the 3000 projects that will no longer get reviewed by the Canadian Environmental Assessment Agency. Across every province and territory, the agency has been forced to cancel hundreds of environmental assessments because of the federal government’s budget legislation this summer.
More on this story: Montreal Gazette, Vancouver Sun, Victoria Times Colonist
Leak of the Week
This week saw another pipeline leak in Alberta, this time 10 kilometres east of Red Deer on a line belonging to Penn West Exploration. The company estimates that over three hundred thousand litres of, what industry terms, ‘produced water’ leaked onto a canola field Tuesday. Produced water is water that travels up well heads along with oil. It can contain high levels of salt. According to licensing documents obtained by CBC, the line was carrying produced water containing three per cent oil.
More on this story: CTV, CBC, Regina Leader-Post
Pacific Trails Pipeline and Wet’suwet’en Territories

The Pacific Trails Pipeline is proposed to run through Wet’suwet’en territories. This includes salmon spawning grounds. In this interview, Toghestiy, hereditary chief of the Likhts’amisyu Clan of the Wet’suwet’en First Nation, speaks with Terra Informa correspondent Annie Banks. Toghesti describes Free Prior Informed Consent, the Pacific Trails Pipeline, the recent Unis’tot’en Action Camp and the resistance by the Wet’suwet’en people to the invasion of their lands by industry.
More on this story: Unis’tot’en Action Camp, We Support the Unist’ot’en and the Wet’suwet’en Grassroots Movement – Facebook Group

Reconsidering Peat Moss
When most of us plant our gardens in the spring, we have an idea of what we want to do to the dirt. Turn over the soil, add a little compost, maybe some mulch…and of course, peat moss. But does peat moss do everything we think it does?
And is it as sustainable as we think? With the help of Laura Edwards, University of Alberta ecology student, and recent Shoreline Advisor for Nature Alberta’s Living by Water program, Chris Chang-Yen Phillips went out into his garden to investigate.
More on this story: Ecoscience Journal (PDF), Hydrological Processes Journal

From the Archives – Amy Goodman on Independent Media

Mushrooms on the Moraine: the Late Summer edition, will be happening on Saturday September 08, from 09 : 30 AM – 05 : 00 PM at Koffler Scientific Reserve at Jokers Hill courtesy of the University of Toronto. This workshop will help you identify many of the wild mushroom species growing early in fall. Hosted by mushroom expert Richard Aaron, the focus will be on fungal diversity, with some mention of edible and medicinal properties.

Take Back the Wild Advocacy School:Want to protect British Columbia’s wilderness? Think you have what it takes to be a leader?You may be interested in the Take Back the Wild Advocacy Training Weekend, October 12 to 14.The Advocacy School is being offered by the Canadian Parks and Wilderness Society’s BC Chapter for 18 to 30-year olds. You’ll learn about government and media relations, endangered ecosystems, and some of the campaigns already underway in BC. Apply before September 13: http://cpawsbc.org/campaigns/campaign-school

Welcome to the home of a special edition of Terra Informa. We are pleased to present our two part radio documentary ‘Rough Waters & Divided Valleys: Voices from the route of the Northern Gateway Pipeline’. 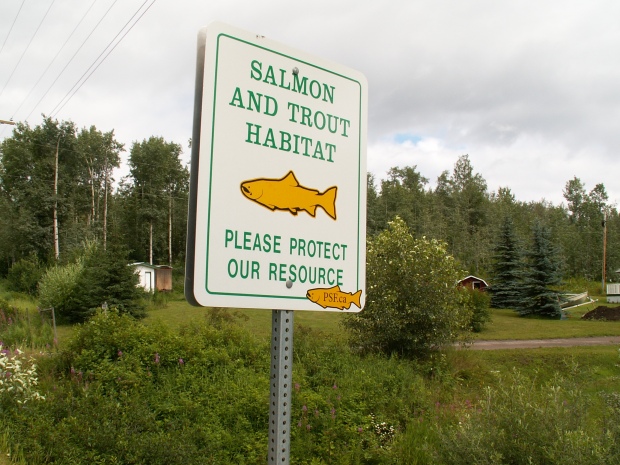 In the summer of 2011, members of Terra Informa set out on a journey to follow the path of the proposed Northern Gateway from its starting point in Edmonton to its terminus in Kitimat, on the coast of British Columbia. When we started our journey and our research, it was clear that this pipeline was going to create a storm of debate. Media coverage would be extensive, and probably influential. But we also wondered whether it would really capture the full range of thoughts and feelings held by those directly affected. This documentary is our attempt to delve a little deeper. It is the result of conversations we had over thousands of kilometers traveled, in communities with the most to gain, and the most to lose. What we found is that a seemingly simple pipeline is creating turbulence in some communities, while building solidarity in others.
For more on the Northern Gateway Proposal and our documentary, including FAQ’s, reports on the project and bonus audio,  check out our special section of the website.